Dylan Hartley: 'If I can add something, the past 20 years haven’t been wasted' 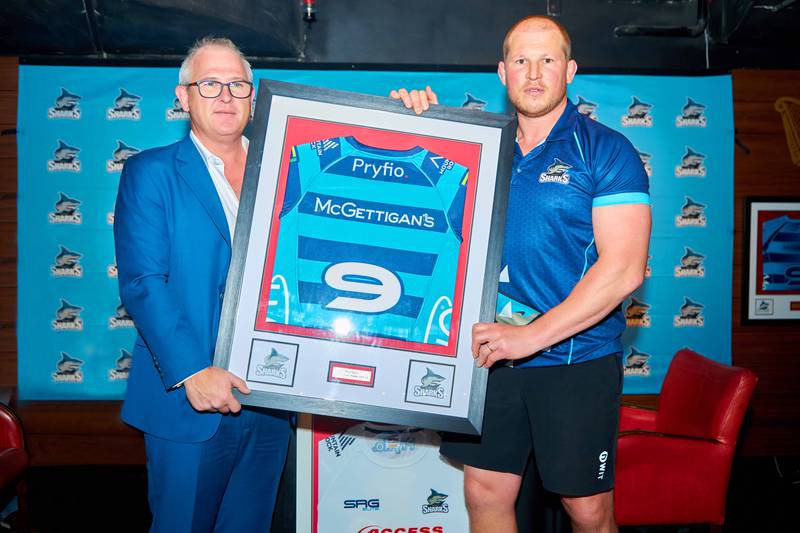 Not too long ago, Charlie Taylor was looking round at Dubai Sharks training and counting the number of players. He would reach three, and that would be it.

Even as recently as last September, when the club was on to its fourth new home venue in as many seasons, things did not always run smooth.

The Sharks had to call in a favour from their sponsors for a loan of some temporary, solar-panelled floodlights so they could play and train out of the heat of the day.

Memories of which must make the events of the past few weeks seem even more surreal than they already are.

“I’ve had a lot of pinch-myself moments lately,” said Taylor, the chairman of the Sharks, a community rugby club whose men’s side play in the UAE Division 1.

“I have been sat at home having a barbecue with friends and I’ve had to say, ‘Oh, sorry guys, got to take this call, it’s Dylan Hartley.’ They told me to shut up.”

Yeah, right. Just the 97-cap former England captain on the blower. Ringing to discuss details of his appointment as director of rugby at the Sharks, no doubt. Of course he was.

In actual fact, he was. On Tuesday evening, it was confirmed Hartley will be relocating from the UK to Dubai, where he will juggle his role with the Sharks with a job in business development with Access Hire Middle East – the equipment rental company who do that decent line in floodlights.

The 400 or so playing members at the club – as well as the wider rugby community in the Middle East – will be abuzz at the news. But they are not the only ones.

“I throw myself back to when I was a kid, and when a local rugby player for a local team would come along, how excited I got as a kid,” Hartley, 36, said.

“When you play the game for as long as I did, to the level I did, you forget that impact. I can understand if I look at it from a bird’s eye view, it is exciting news for a grassroots club.

“That is brilliant. But for me, it is equally exciting. Although I have been in and around it, I have never been in the role that I am going into.

“You know what? You can talk about these things, or you can get on with it and get stuck in. For me, there is no better time than now.”

Dylan Hartley of England lifts the the Calcutta Cup after defeating Scotland at Twickenham on March 11, 2017 in London, England. Getty Images

Hartley has had a packed few days in Dubai, beginning with the visa process and looking for a place for him and his young family to live.

He has long been interested in a move to the city. When breaks in his playing career with Northampton Saints and England permitted it, he was a regular holidaymaker in Dubai.

Discussions over a role with the Sharks started when he came to the Dubai Sevens last winter to coach the Bali Legends side in the International Vets competition. Now it has been finalised, he cannot wait to get started.

“Rugby kept me where I was in England, whereas now I have the opportunity to travel with my experience in rugby, which has opened up this door,” Hartley said. “The draw for me, with a young family, is to come and experience a completely different culture altogether.

“It is the hardest thing about transitioning from sport. You leave behind 20 years of experience, which I don’t want to do. The stars have aligned with the Sharks giving me the opportunity to use that experience. Hopefully it works. If I can add something, then the past 20 years haven’t been a waste.”

Since retiring from playing in 2019, Hartley has carved out a reputation as a straight-talking, entertaining and enlightening pundit on the game.

A career in the media would be a given for a former player with such a glowing CV, who captained England 29 times and maintained an 85 per cent win rate while doing so. He says he hopes to maintain his media commitments back in the UK, but is committed to his new challenge in the UAE.

“I’m not going to be one of those stories where there is a shortage of players and the coach has to dust off his boots,” he said. “If you see me touchline, you will see the limp on my gait is terrible.

“It is a broader workload where I will be spending my time. A rugby club has a lot of roles. Whilst I am not a first-team coach, or a forwards coach, I will be adding where I can and assisting our coaching team.

“I am not there to tell them what to do. I am there to assist them. Then it is about looking at the overall picture.”

The Sharks began in 2006. Initially known as the Arabian Potbellies, they were renamed in 2011, and have had a nomadic and occasionally troubled existence for much of the time since.

By 2017 they had three men’s teams, two women’s teams, and an association with the Warriors mini and youth section. The loss of their home ground at Dubai Sports City that summer, though, led to a player drain that almost led the club to fold.

They were revived initially by a recruitment drive at around the time of the 2019 World Cup, as well as by way of their response to the climate created by Covid.

“People were losing their jobs, there were lots of questions, and our community became a place for people to help each other out,” Taylor said.

“It really helped with the vibe of the club. We played a season of 10s, which was difficult for us, but the momentum just continued.”

The club’s revival has reached the point where – barely believably – they can appoint someone of Hartley’s standing to oversee its further expansion.

“Midway through last season we knew we needed to do something different to help grow those numbers, but also help the coaches we also had on board,” said Mike Quinn, the club’s president.

“Having someone like Dylan will be an amazing thing to help with that. He is going to be instrumental in our recruiting of coaches and players, and will put in place the strategy for how we want our teams to play, all the way from Under 4s to our first team.”